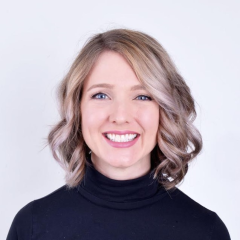 Start a telemedicine call with

Practicing in Dedham and Hyannis

Biography
Alicia’s passion for pelvic health began during her undergraduate studies when she assisted in data collection for a chronic pelvic pain study at the University of Florida. As a student, she also published two systematic reviews of clinical measures for incontinence and sexual dysfunction in patients with urogynecological and colorectal cancers.

Since then, Alicia has completed the full Herman & Wallace pelvic floor series and worked both in mentored roles and as the sole pelvic floor physical therapist in a geographically underserved region. As the needs of the community grew, she helped train new therapists in pelvic floor rehabilitation. This provided her with the opportunity to also achieve a specialization in lymphedema therapy and bring that service to the area as part of a new cancer rehab program.

Prior to joining GBU, Alicia worked in an outpatient and orthopedic setting with Select Physical Therapy in Pensacola, Florida, while independently developing specialty programs for pelvic health and lymphedema. She has given lectures to new mothers in the military, physical therapist assistant students, and the general public on the benefits of pelvic floor rehabilitation.

A member of the American Physical Therapy Association (APTA) as well as the APTA Section on Women’s Health, Alicia loves helping patients see connections between the symptoms they are experiencing and the potential solutions they may have never considered. She will be seeing patients in GBU’s Dedham Care Center.